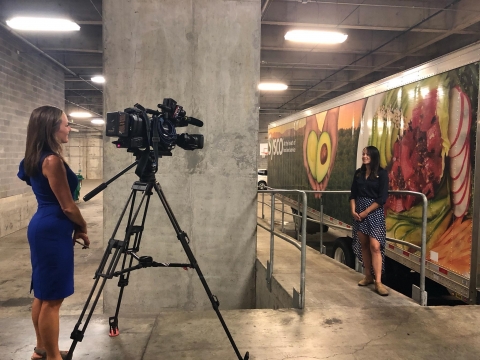 Click here to view the article from FOX 17 Nashville.

NASHVILLE, Tenn. (WZTV) — We all need it, but food is something Project Nashville discovers, we’re wasting a lot of.

Just ask Stacy Downey who sees Nashville’s hunger problem first hand every day. She’s on her second career after 25 years in ophthalmology. Now, she runs The Little Pantry That Could in North Nashville, something she started because of the 2010 flood.

“I really thought I'd do this for a few months and then go back to my real life," Downey said.

However, historic growth followed the historic flood and there's no way Downey could close her food pantry now.

“Every single thing will be gone and then I'll have another week to figure out where the food will come from next week," Downey said.

The irony Project Nashville uncovered? More than 20 percent of what's buried in a local landfill, is food. What's more, the average family is throwing away about 250 pounds of food a year according to the Nashville Food Waste Initiative.

It’s like buying six bags of groceries and tossing a couple in the trash.

“In an ideal world, no food would go to the landfill right? We'd be preventing waste from happening, we'd be rescuing surplus food and we'd be recycling our food scraps," Linda Breggin with the Nashville Food Waste Initiative explained.

Some of the buried food in our landfill is perfectly good to eat. All of it, fit for recycling and that's where Clay Ezell comes in.

He's not feeding people directly like Downey, he's doing it indirectly, by diverting food from our regional landfill the state projects will fill up in 8 years to grow new food instead.

“The funny thing is it's the oldest form of recycling there is," Ezell explained. "When it gets covered up every day, it doesn't really break down right.”

He and his partners turn rotting food into fertile soil.

“By diverting it from the landfill, you're encouraging its natural breakdown and provide an environmental benefit with the finished material that we put in the hands of farmers, gardeners, landscapers and contractors," Ezell explained. "It's the best fertilizer there is.”

Composting is something Metro Government believes all of us will have to do soon because we won't have a choice.

Breggin says, “About a 1/3 of food waste is coming from our own homes and about 1/3 is from restaurants.”

Dozens of restaurants are now composting, about 100 already. Large players like Kroger and the Music City Center are leading the way. Renee Barker, the Sustainability Coordinator for MCC says, “All of our leftover food that we can donate, we do that, but the rest we compost. Last year we composted over 131,000 pounds.

Metro has drop off sites for your old food too. Bottom line Breggin says, if we diverted all this wasted food from the landfill, we could directly or indirectly feed all of Nashville's hungry people adding, “We're throwing away almost 40% of our food and it just doesn't make sense.”

Downey adds, “This used to be such a great place where anybody could come and raise their families and retire and it's just not that way anymore.”

Ezell and Downey, two long time Nashvillians, are working separately, but in tandem to take better care of our 'New Nashville.'

Here are some resources to help you get started composting: